We live in a box of space and time.
Movies are windows in its walls.

What does Google tell us about Angel Eyes (2001)? Take a look and see. You’ll remember that it was a Jennifer Lopez movie released on May 18, 2001. You’ll learn that it was an R-rated Romantic/Drama running 1 hour and 42 minutes, and that it grossed $29.7 million worldwide against a reported budget of $53 million. You’ll find that it holds a 33% score on Rotten Tomatoes, aggregated from 132 critics who happened to be publishing criticism in the early summer of 2001—including Roger Ebert himself. He gave it 3 stars out of 4, calling it “a surprisingly effective film.”

Those are the facts, but how will we explain Angel Eyes to our grandchildren? What words will we find, when Google is no longer, and the numbers don’t add up to the whole story?

First of all, we’ll tell them it was a Movie. Movies are gifts without a giver, we’ll explain. Like a spectacular Summer waterfall or an autumnal Adirondack canopy, a single creator can only be held so responsible for their springing into being. Movies are the images on screens—whether at the the distant drive-in, the neighborhood multiplex, or the all-too-close flat screen. They’re also the images on our walls, in our magazines, and on our oversized tees, hovering like Gods. They’re the faces on our Pepsi cans, or the woman on our bag of Salt & Vinegar potato chips. They are family, in that their love is unconditional. They are friends, in that they come and they go—and to a very precious few should we hold on. 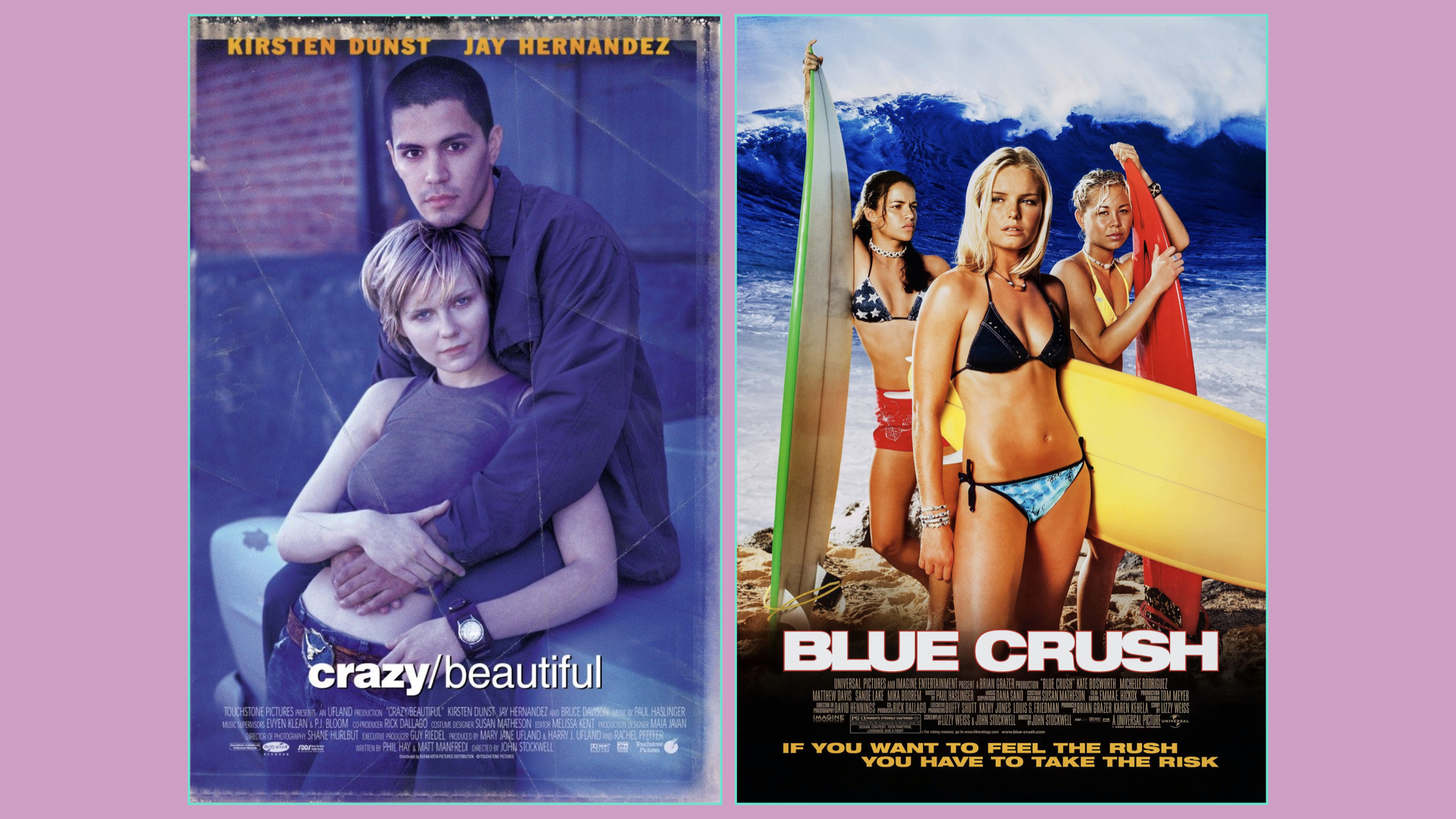 But then we’ll clarify that Angel Eyes wasn’t just a Movie. It was one of the Great Movies. It sat alongside the same rickety dock of summer 2001 with crazy/beautiful, Baby Boy and Final Fantasy: The Spirits Within, their legs all dangled off and toes dipped into the unblinking surface of the lake. Had it been a couple summers earlier, they might have feared that fellow Greats like Lake Placid or Deep Blue Sea would circle too close for comfort. For now, they’d just gaze ahead at the setting sun, the brilliant end-of-day sky undisturbed by auteurism, the tottering canoes of friends like Brokedown Palace and Teaching Mrs. Tingle sending gentle waves back from the horizon.

You and I would watch the scene from ashore, keeping our distance from them, like they were older cousins. Sometimes they’d look back from the end of the dock, Angel Eyes and the others, returning an impish smile, confused and playful intimations of sex and violence in their eyes. The distance from the shore to the end of the dock is everything: the distance of our desire divided by the gaps in our knowledge. 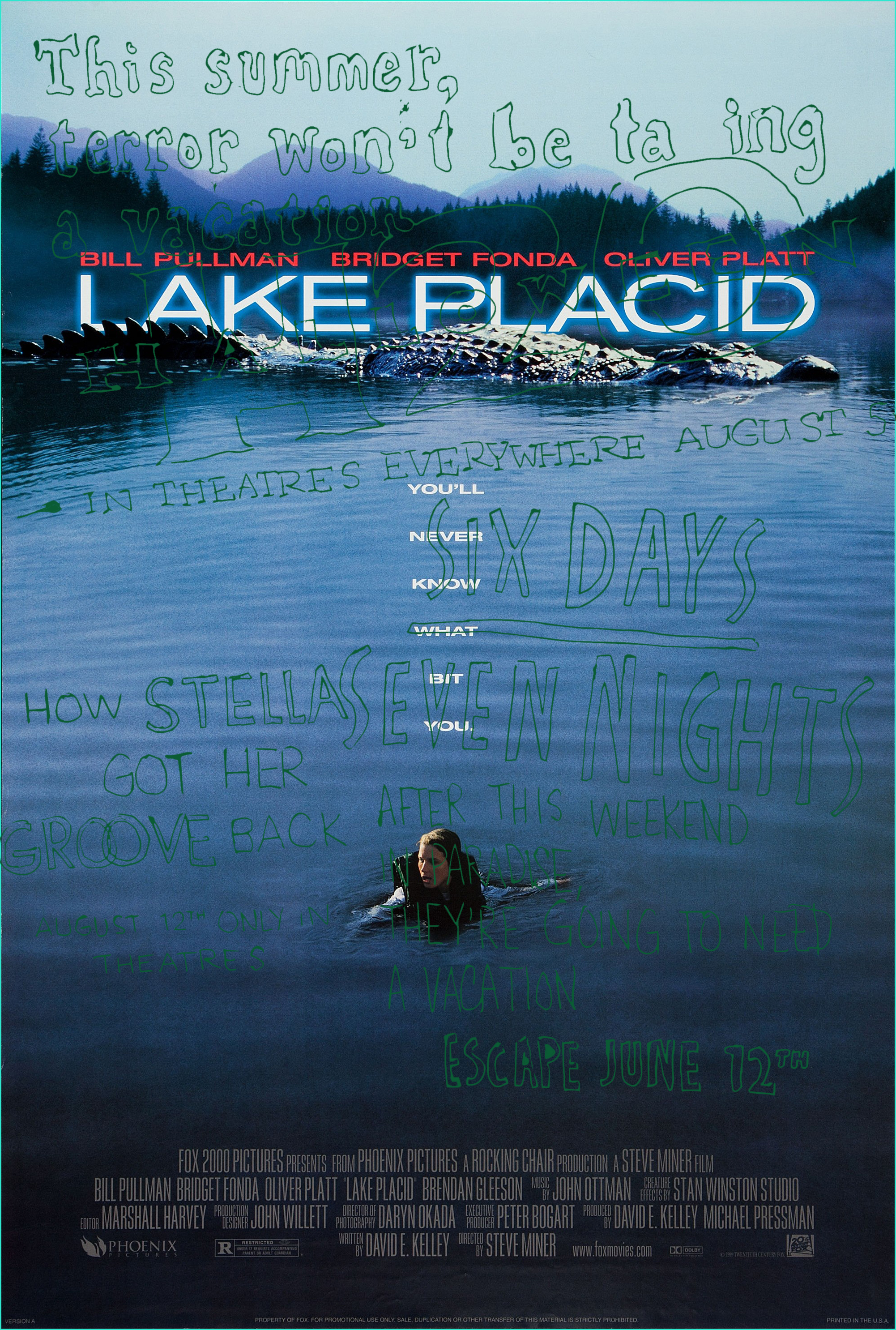 If you’re following along, you might have taken note of Angel Eyes’ May 18, 2001 release date—yes, the same day as Shrek. So why aren’t we talking about Shrek? Or any of the other major releases and box office phenomenons that graced us that summer, like The Fast and the Furious, The Mummy Returns or The Deep End? We have, and we will, but this box of space and time is devoted to the Greats. Perhaps we are the only windows left in Angel Eyes’ walls. Like so many of the Great Movies, it gazes out as if it knows something we don’t. Like it sees something we can’t. It’s not so much looking through us as it is looking for us.

The Great Movies project is both specific and unspecific, personal and impersonal, much like the movies themselves. It’s a very simple idea—an initial canon of 100 movies, made more or less in the Hollywood studio system between the years of 1995 and 2004, most of them what you might call “programmers”, most of them relatively unsuccessful and uncanonized—that bears witness to some complicated questions. Were movies really that different 20 years ago? Whatever happened to the mid-budget movie for adults? In a historic year like 1999, when movies like The Matrix and The Blair Witch Project blazed trails at opposite ends of the production spectrum, what was really going on in between? Will our generation be the last to feel this synchronized with the emotional tides of the studio release calendar, and does it matter? Is a movie worth remembering just because you remember it?

Is The Horse Whisperer or The Spitfire Grill really Greater than Titanic? Truthfully, we aren’t sure. Despite their inclusion on the list, we haven’t seen either of them. Actually, we haven’t seen many of the Great Movies, at least in the conventional sense of “having seen a movie.” But we love to imagine them, as we did when they were new. In that sense, we’ve seen them all, over and over, in ways that would put certain of the canonized movies we’ve suffered through to shame. The Great Movies is about chipping away at those gaps in our own knowledge, all the while knowing there’s something to be said about leaving certain of those gaps empty. Left alone, like that old cedar chest collecting dust at your grandma’s summer house by the lake. Sometimes it’s better remembered for being a mysterious chest than for whatever was actually locked inside. 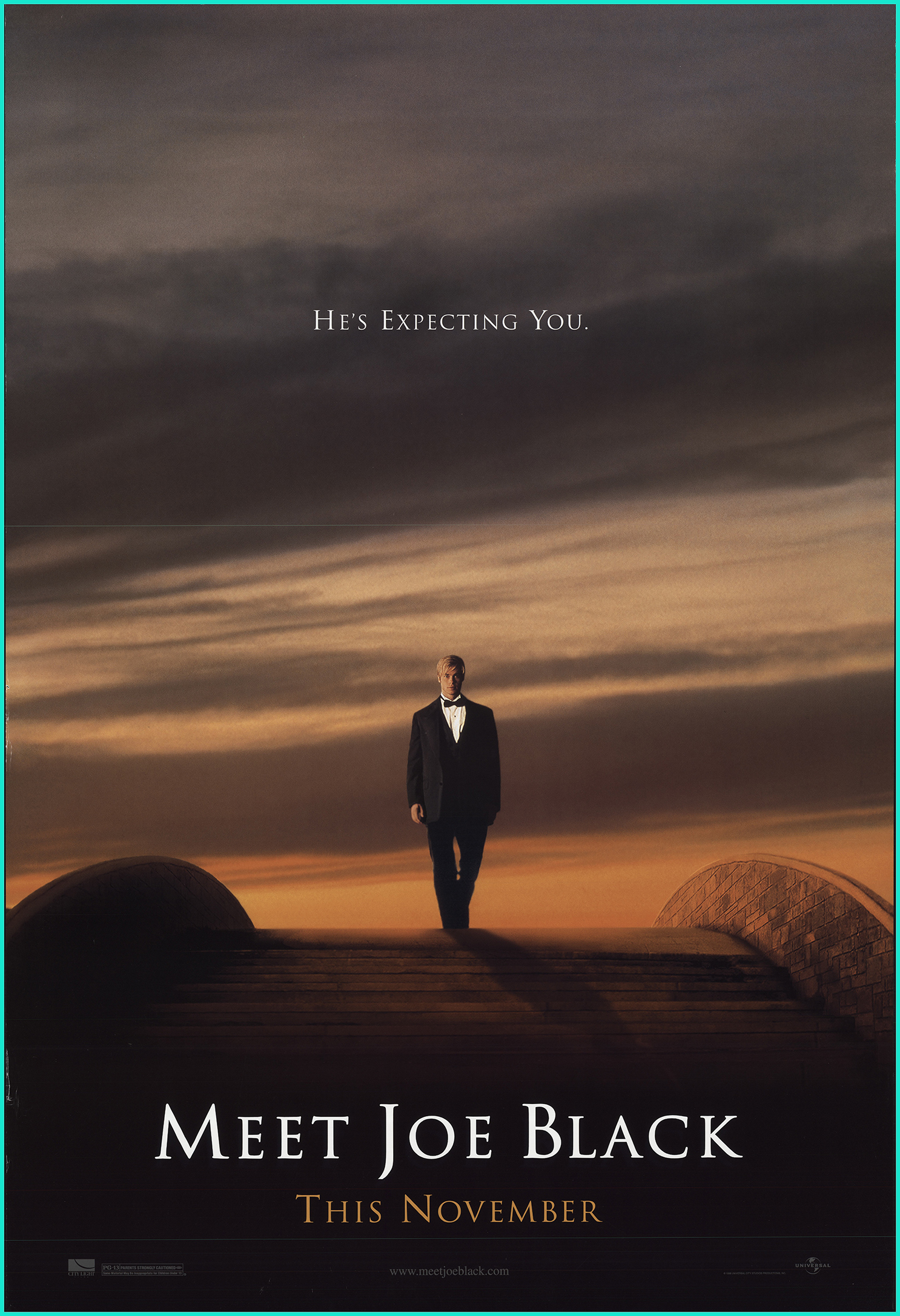 In Roger Ebert’s introduction to his original volume of The Great Movies—first published in 2003, toward the end of their reign—he elaborates on what distinguishes a Great experience: “[Movies] allow us to enter other minds, not simply in the sense of identifying with the characters, although that is an important part of it, but by seeing the world as another person sees it. François Truffaut said that for a director it was an inspiring sight to walk to the front of a movie theatre, turn around, and look back at the faces of the audience turned up to the light from the screen. If the film is any good, those faces reflect an out-of-the-body experience: the audience for a brief time is somewhere else, sometime else, concerned with lives that are not its own.”

We like to imagine that same, out-of-body scenario, except those aren’t people in the audience. They’re the movies on this list, gazing back in the way that only they can. You might find them surprisingly effective.

Without further ado, here are The Great Movies: 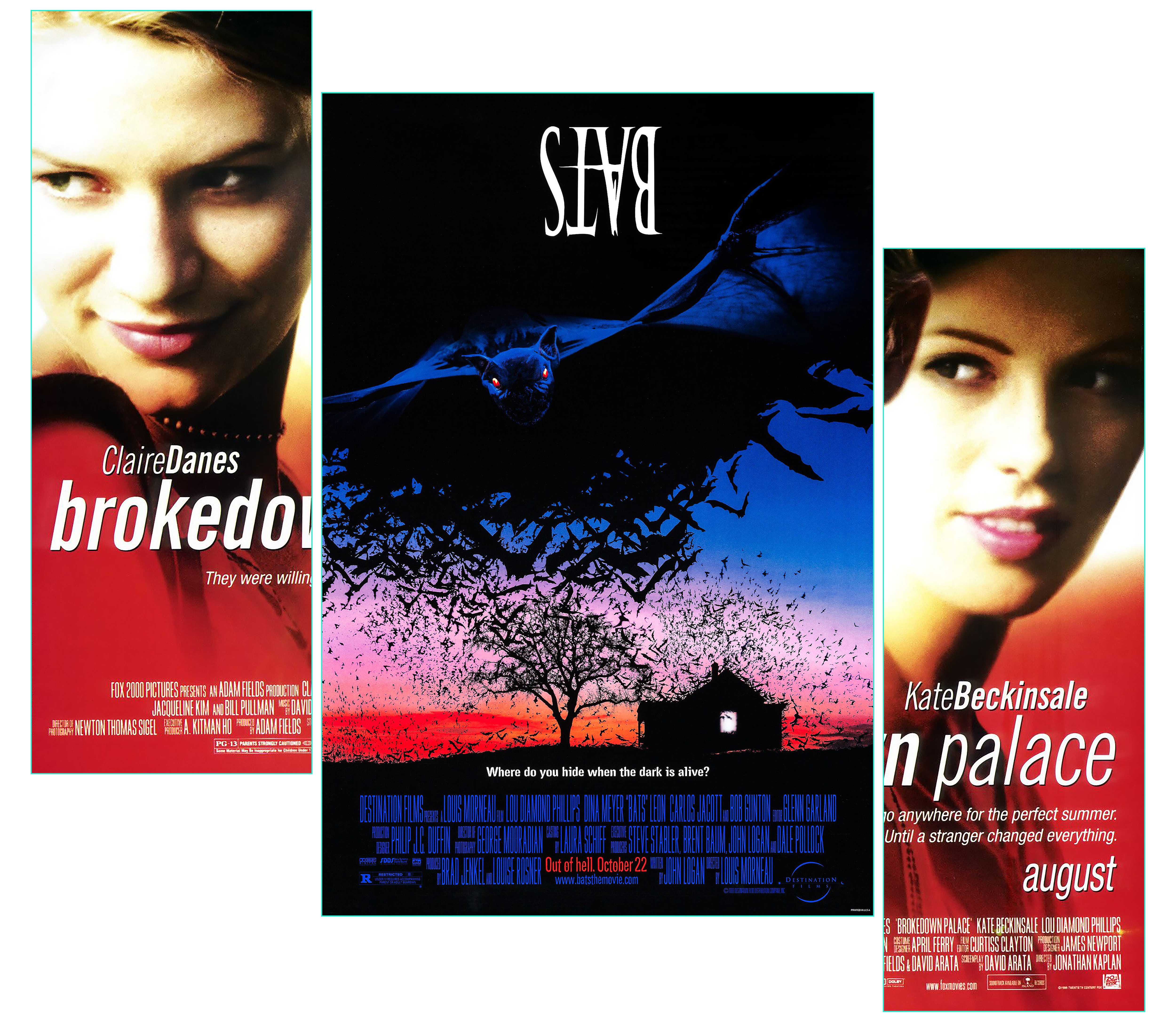 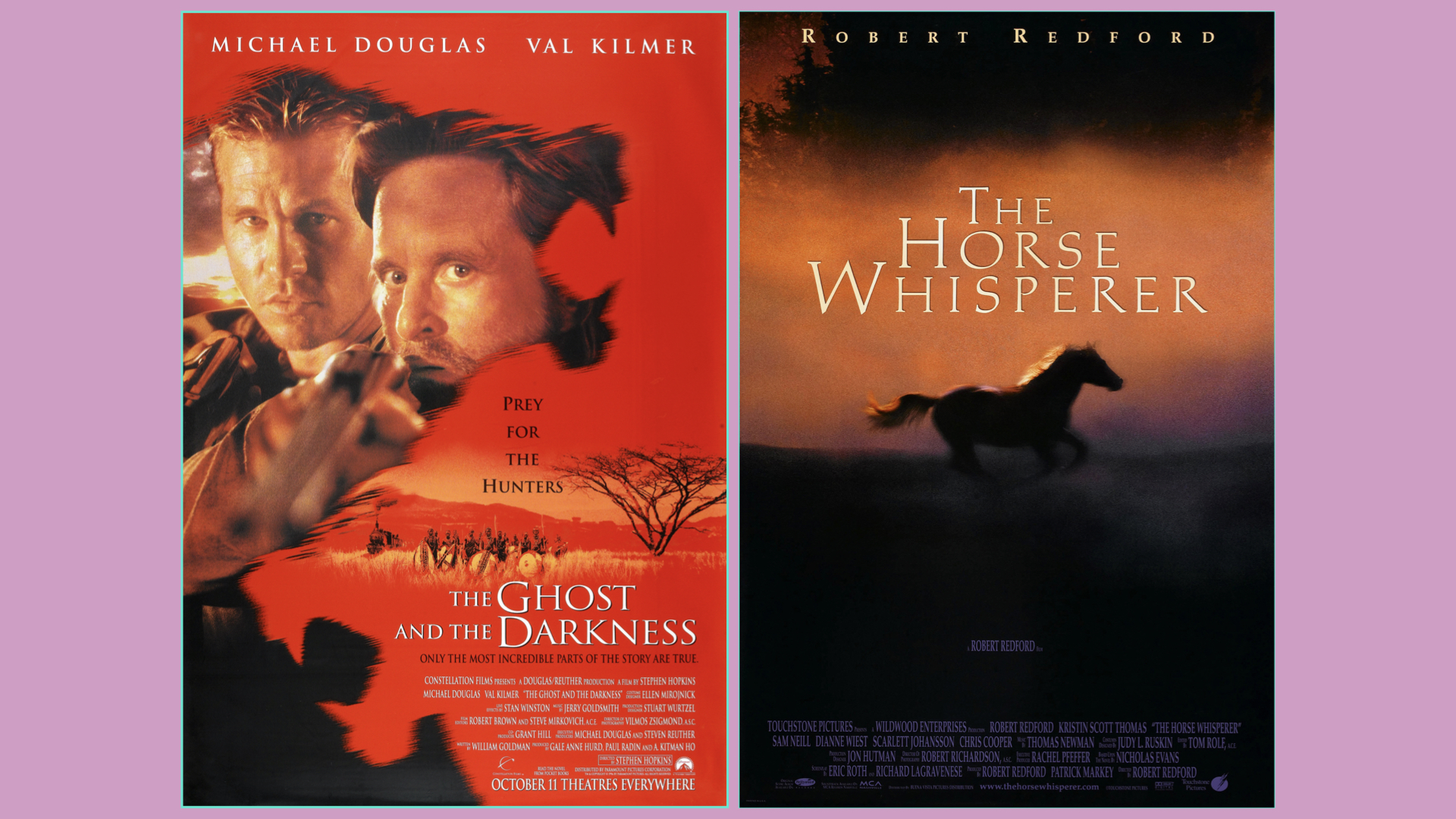 Halloween: H20
Hardball
Hard Rain
The Haunting
Hearts in Atlantis
Here on Earth
High Crimes
Honey
The Horse Whisperer
House on Haunted Hill
How to Deal
How Stella Got Her Groove Back
I Dreamed of Africa
The In Crowd
In Dreams
I Still Know What You Did Last Summer
Jeepers Creepers
Kiss the Girls
Lake Placid
The Legend of Bagger Vance
Light It Up 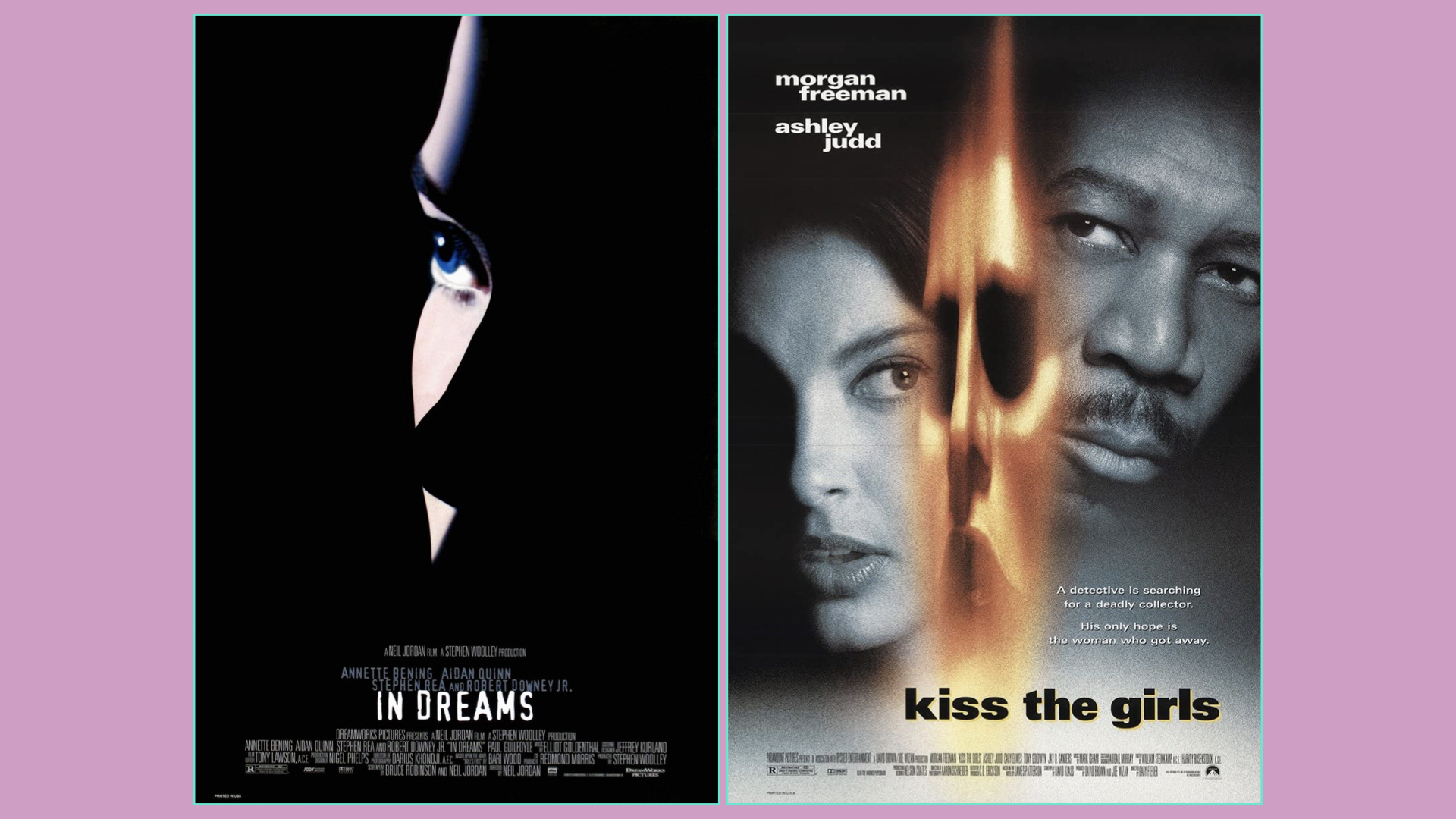 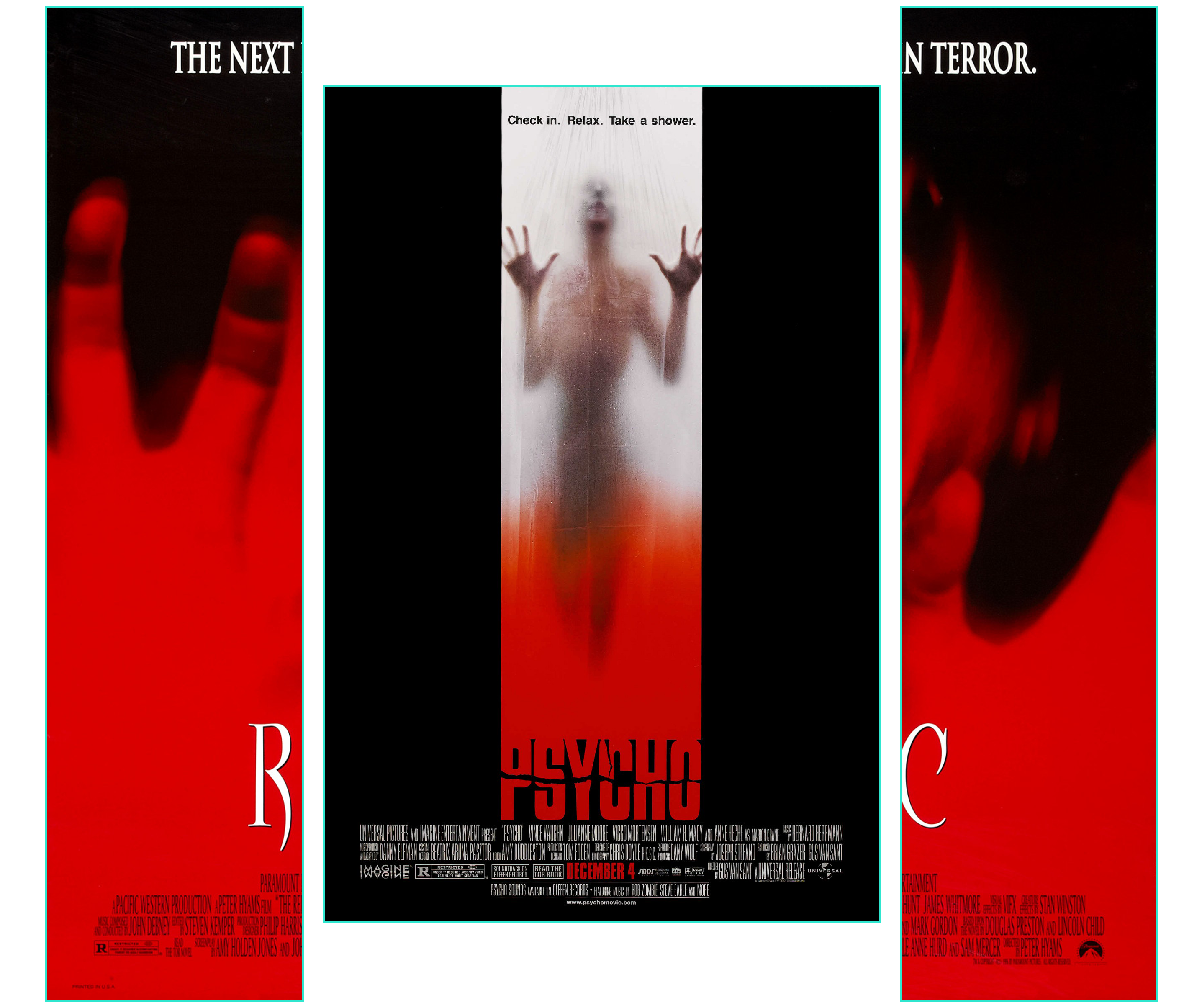 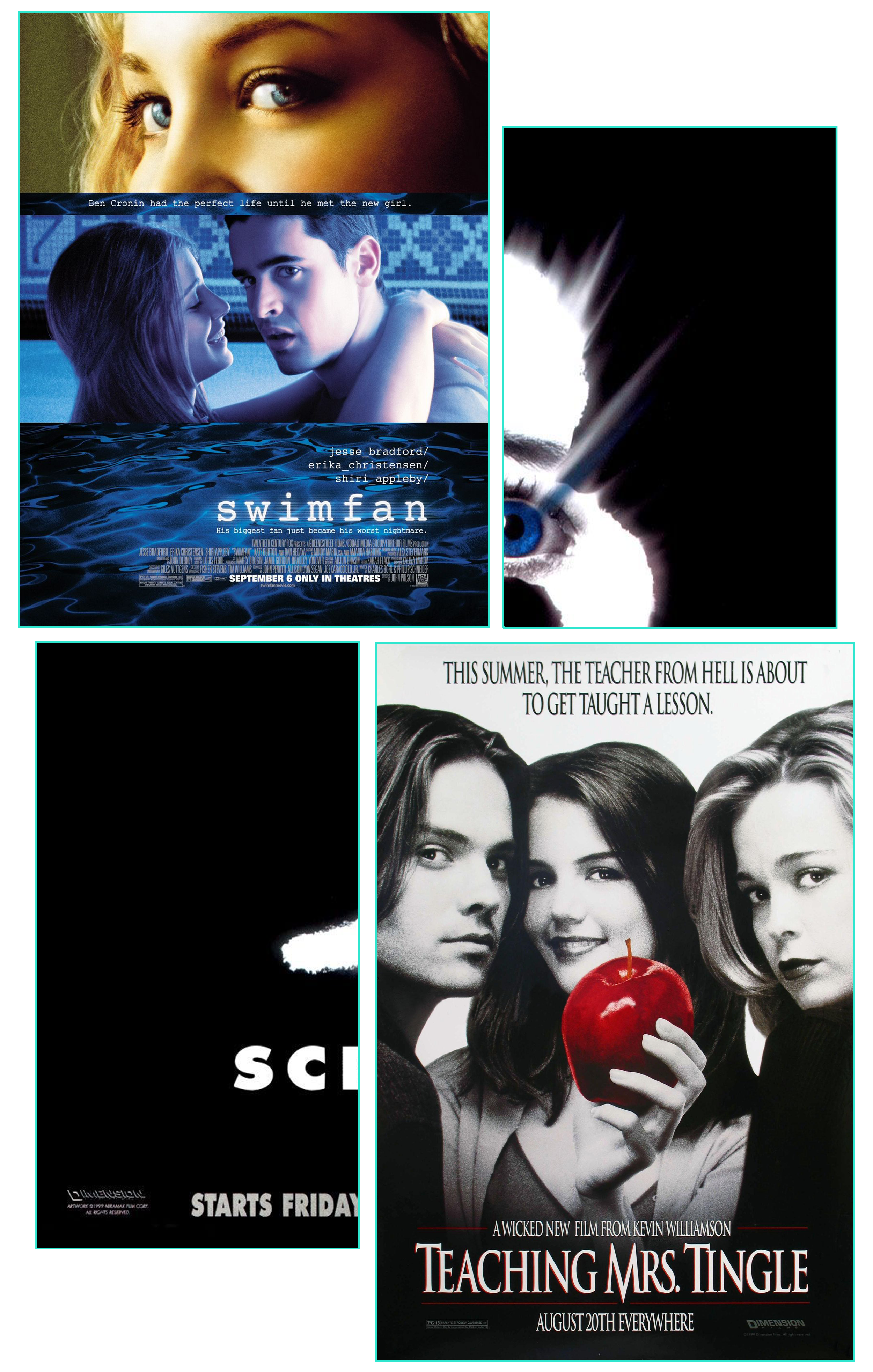 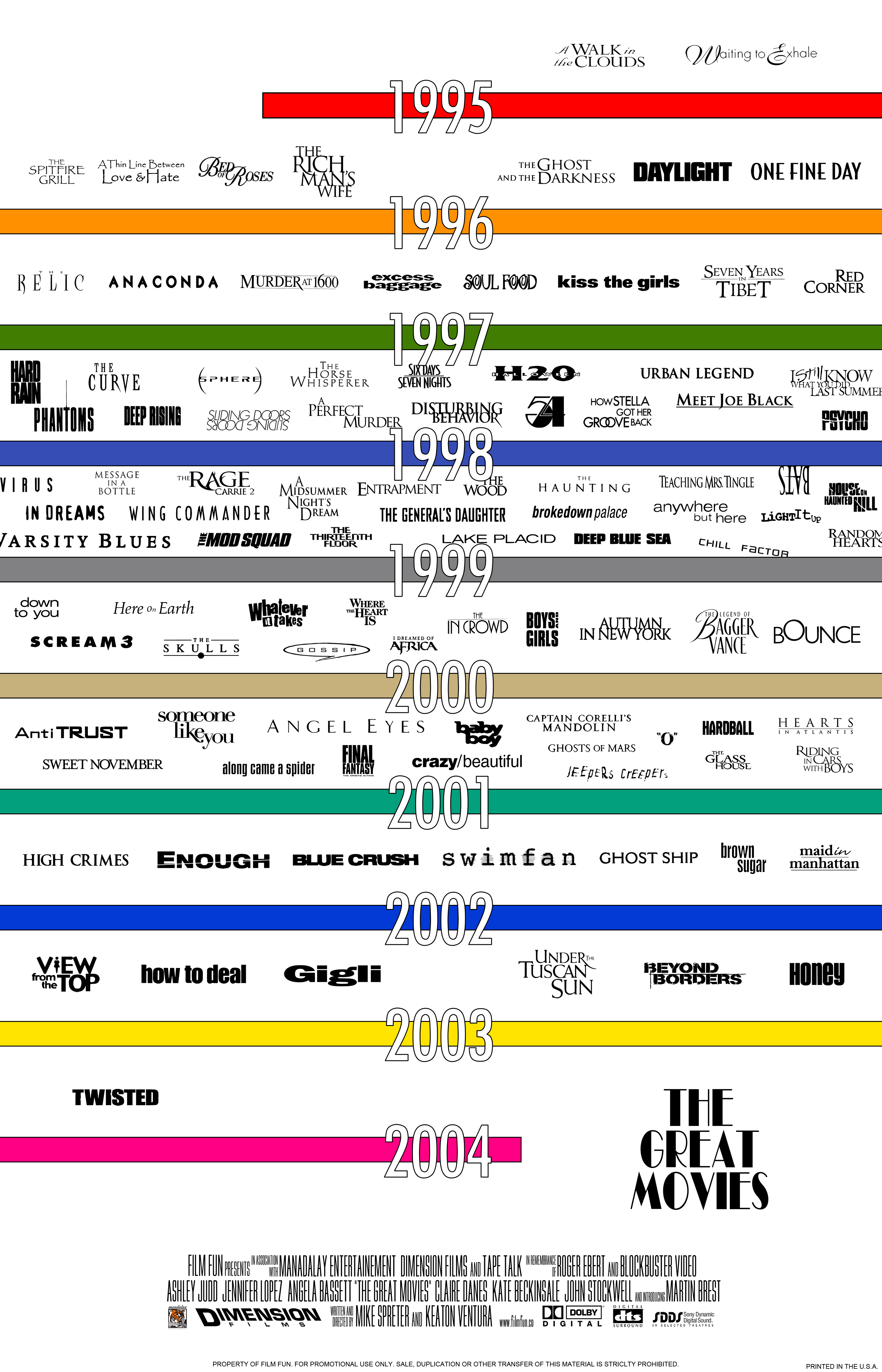 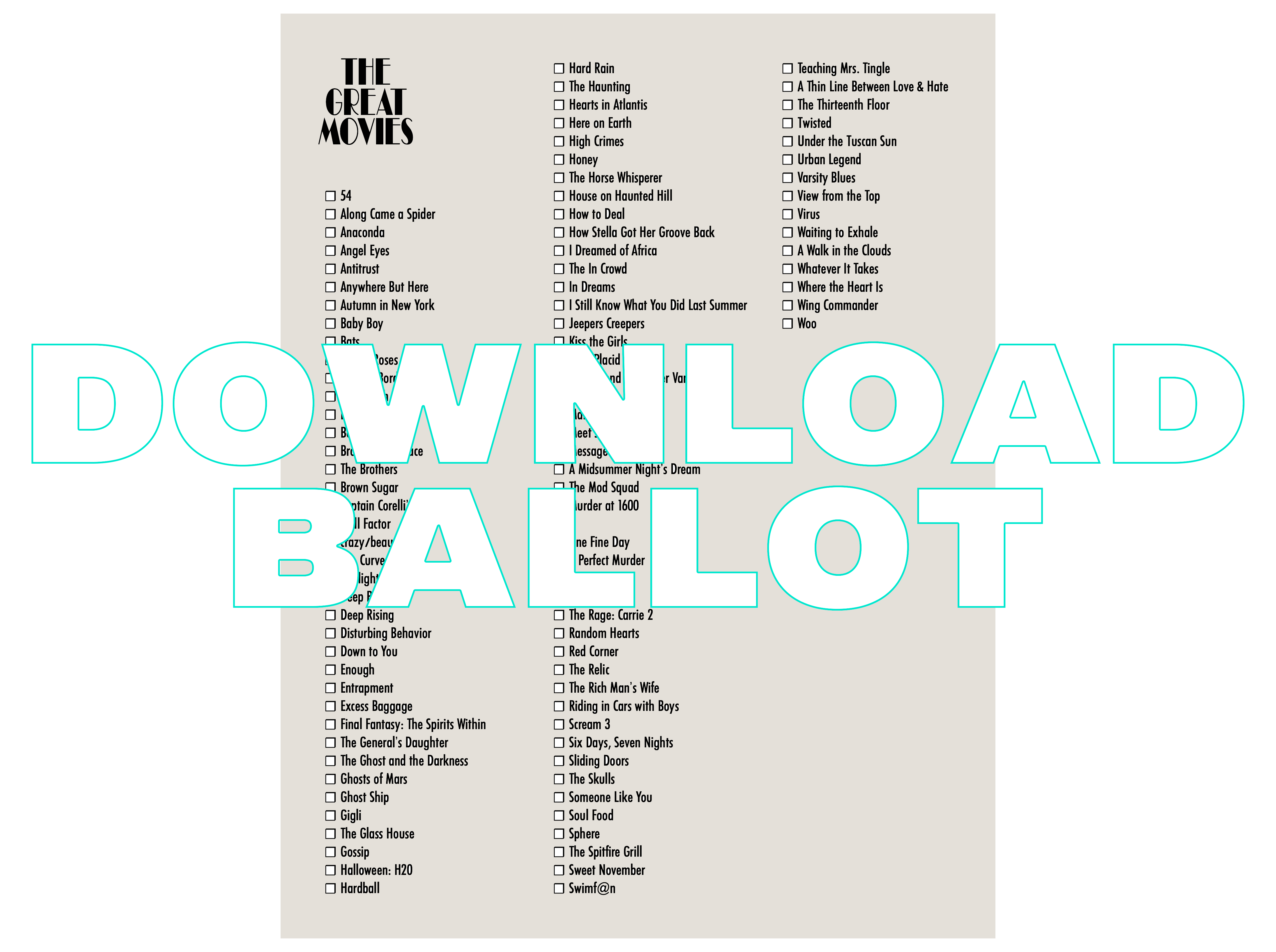 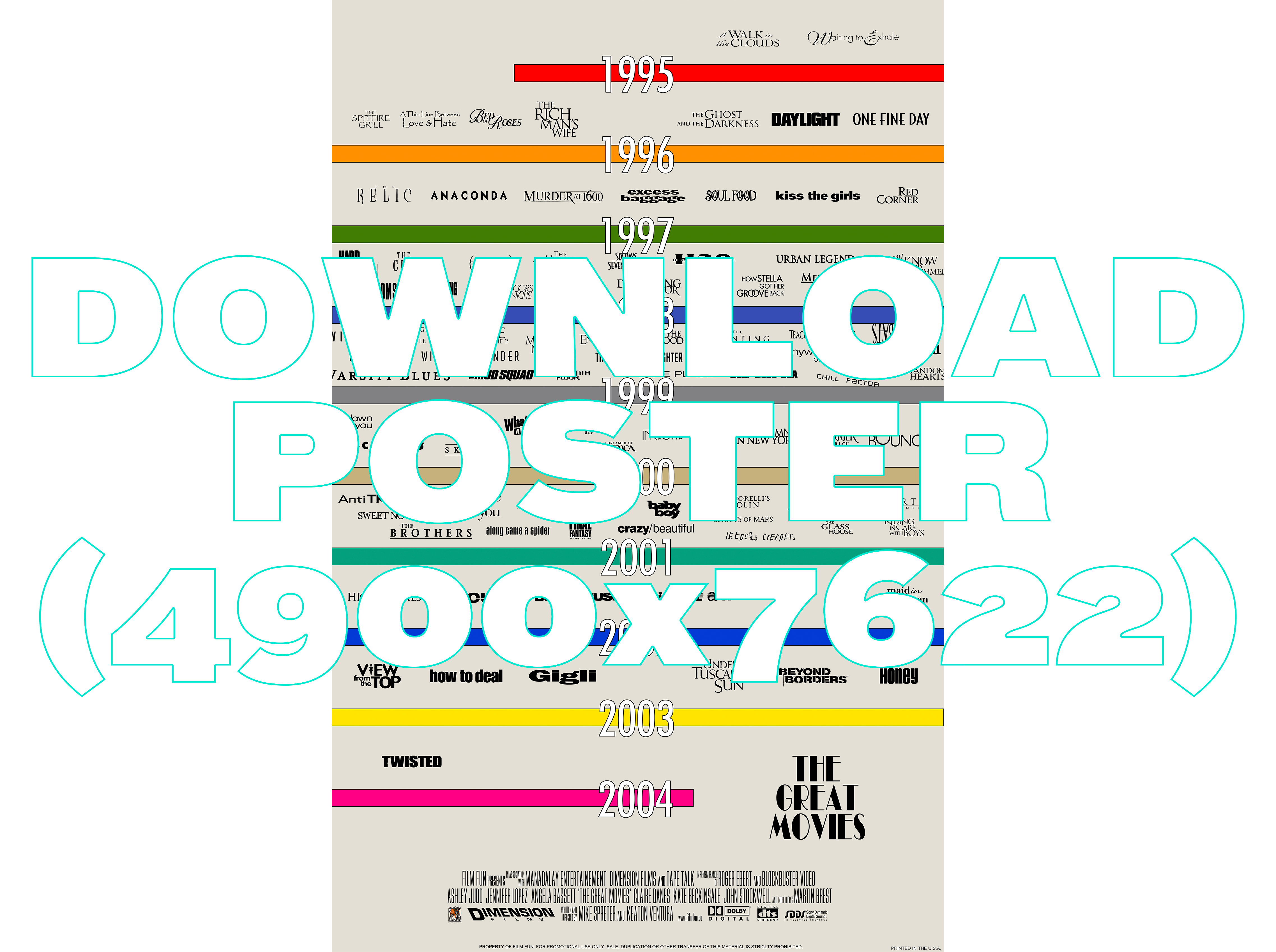